An antisense oligonucleotide is a single DNA or RNA sequence consisting of 15-25 nucleotides paired with target genes. It specifically blocks the transcription or translation process of target genes to achieve the purpose of gene regulation. Antisense oligonucleotide drugs have high specificity, high efficiency, safety, low toxicity, and stability at present. It is currently the most ideal and promising anticancer and antiviral drug.

The Mechanism of Action of Antisense Oligonucleotides

Antisense oligonucleotides (ASOs) can be obtained by chemical synthesis. All the factors, such as the chemical properties of ASO, the position of binding RNA, and the function of target RNA, may affect the regulation of ASOs. The regulation mechanisms of ASOs on RNA are mainly divided into two categories: RNA degradation mechanisms and space occupying mechanisms.

Generally, antisense oligonucleotides can promote RNA cutting by RNaseH1 or Argonaute2 (Ago2). RNaseH1 is an endogenous nuclease that is present in most cells and promotes RNA cutting in RNA-DNA double-stranded heterozygotes. Oligonucleotides using RNaseH1 as their mechanism of action must contain at least five consecutive DNA nucleotides, of which 7-10 are optimal. For example, the antisense oligonucleotide drug Inotersen has 5 2-MOE nucleotide modifications at the 5 ‘and 3’ ends with 10 DNA nucleotides in the middle, which block the production of transthyroxine (TTR) protein through the RNaseH1-dependent mechanism. It’s used in the treatment of neuropathy caused by hereditary transthyroxine amyloidosis (hATTR).

Similar to the action mechanism of RNAi, antisense oligonucleotides can also achieve RNA degradation through RNA interference pathways. ASOs enter cells or organisms in double-stranded form and bind to Ago2 nuclease. Then, the double-strand opens, and one strand binds to target RNA and the other strand degrades. Which one binds to the target RNA is determined by the composition of the 5 ‘-end base of the oligonucleotide. Ago2-dependent mechanisms also have specific structural requirements for oligonucleotides and limit the types of modifications that can be used. They are widely used as experimental tools to reduce the expression of target genes and are also being developed for a number of therapeutic indications. 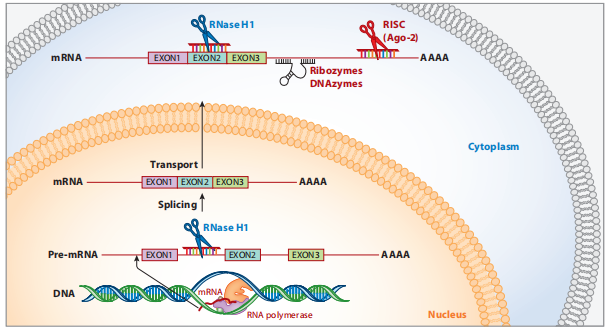 In most mammal cells, the process of pre-mRNA translation into protein needs to go through the addition of a 5 ‘cap, 3’ tail, intron splicing, and other steps. Antisense oligonucleotides can regulate RNA in every step of this process, thus affecting protein expression. In some antisense mechanisms, the binding of ASOs does not lead to direct degradation of target RNA, but can block or increase protein translation by binding to different sites of RNA. In addition, ASOs can also indirectly regulate gene expression by interacting with regulatory RNA molecules in the organism. For example, microRNAs can inhibit the translation of multiple mRNA targets, while ASOs can also bind to microRNAs and prevent microRNAs from binding to RNA, thereby eliminating the translation inhibition of multiple targets by microRNAs. Furthermore, ASOs can increase the expression of suppressed genes by blocking the interaction of long non-coding RNAs with chromatin. 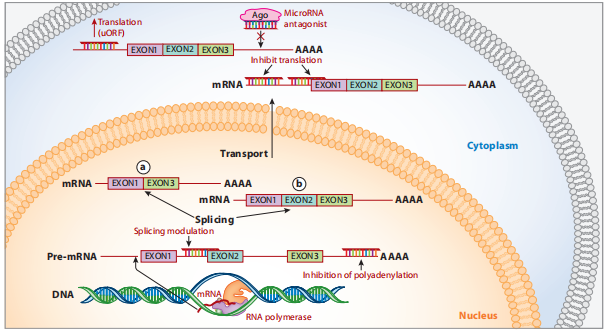 The Modification of Antisense Oligonucleotides

After entering the organism, antisense oligonucleotides will bind with cell surface proteins and form intracellular vesicles through endocytosis. Unmodified RNA or DNA degrades rapidly in organisms, so modification groups are critical to the oligonucleotide sequences in order to enhance their efficacy as therapeutic agents. The most commonly used modifications include phosphoric acid skeleton modification, 2’ sugar modification, base modification, coupling compounds, etc. The modified sequences show increased affinity for RNA, increased stability of antinuclease, and decreased pro-inflammatory response. This includes oligonucleotides with a thiophosphate (PS) modification, which increases binding ability to serum proteins in vivo and remains in circulation for a long time to be distributed to various tissues, showing good pharmacokinetic characterization. In addition, oligonucleotides containing PS and 2-O-methoxyethyl (MOE) modifications have a half-life of several weeks in tissues. Galnac-coupled ASOs enhances delivery to the liver, showing 20-30-fold enhanced potency. 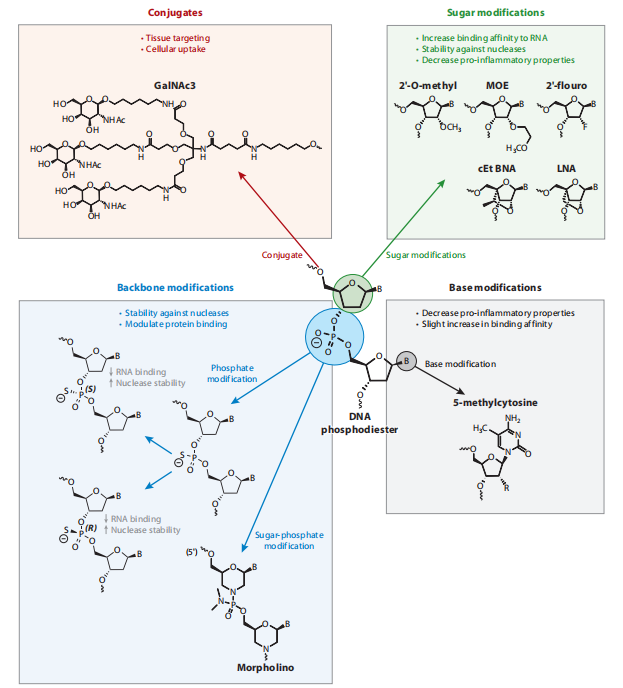 Synbio Technologies is deeply engaged in the synthesis of small nucleic acids and works to consistently optimize and explore the production process of modified oligos and probes while following strict quality inspection standards. We can provide various modified or fluorescent labeled oligonucleotides for the growing scientific research and industrial customers of in vitro diagnosis, drug discovery, detection and identification, etc. Synbio Technologies has passed ISO9001 and ISO13485 quality management system certifications. Under strict quality control, we can ensure the output of high quality ASOs products.