The most common way of researching a gene’s function is by conducting a phenotypic analysis after decreasing or blocking the corresponding gene expression. RNAi is always the most common technologies used to reduce gene expression. However, the newly emerging technologies such as CRISPR-Cas9, have gradually begun to replace RNAi. One of the main reasons for this shift is that RNAi targets mature RNA while CRISPRi alters the gene expression on the transcriptional level. RNA is more unstable than DNA, leading to mix results when using RNAi. CRISPR-Cas9, on the other hand, is much more suitable for analyzing the specific function of non-coding RNA. Additionally, since CRISPR is near the transcriptional start site, off-target effects are much less than RNAi. 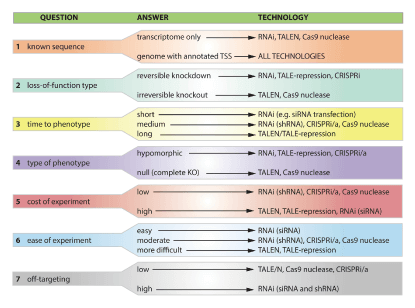