The Many Types of RNA

Ribonucleic Acid (RNA) is a genetic information vector found in living cells, viruses, and virus-like-particles. It is a long chain polymer molecule consisting of ribonucleotides linked by phosphodiester bonds. It serves as a translator between the DNA code and the proteins that the cell needs to make and has a variety of biological roles in the coding, decoding, regulation, and expression of genes. 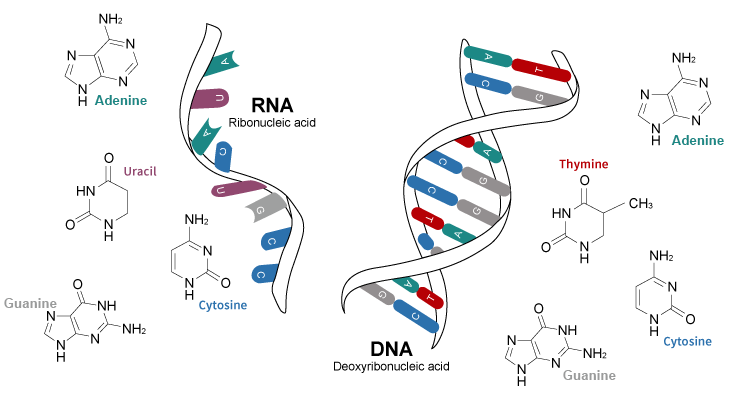 Small Interfering RNA, abbreviated as siRNA, refers to a class of double-stranded RNA molecules about 21-23nt long. Generally, there are two free bases at the 3′ end, which silence target genes through the RNA interference pathway.

microRNA, abbreviated as miRNA, is a type of ribonucleic acid molecule about 21-24nt long commonly found in eukaryotes. Mature miRNAs are single-stranded RNAs that regulate the expression of target genes by degrading target mRNAs or inhibiting protein translation.

Short Hairpin RNA, abbreviated as shRNA, is a short double-stranded RNA structure (19-25nt) that depends on stem-loop sequences. It can be introduced into cells by vectors, enzymatically cleaved to form siRNAs in cells, and regulate target genes through the RNA interference pathway.

There are many similarities between siRNA, miRNA, and shRNA; and they can even be substituted for each other under special circumstances. As the protagonists of RNA interference research, each of them play a different role.

Messenger RNA ( mRNA) transmits genetic information from genomic DNA to ribosomes as a “messenger” during the synthesis of protein molecules, so that the ribosomes can synthesize the correct peptide chain by incorporating the complementary paired transfer RNA (tRNA) molecules in their base order.

Ribosomal RNA, abbreviated as rRNA, is the main component of the ribosome. The ribosome is the factory for protein synthesis. In E. coli, rRNA accounts for 75% – 85% of the total amount of RNA in cells, while tRNA accounts for 15% and mRNA accounts for only 3% – 5%. rRNA is usually combined with ribosomal proteins to form the ribosome. If the rRNA is removed from the ribosome, the structure of the ribosome will collapse. There are four main types of rRNA in eukaryotes. Their molecular sizes are 5S, 5.8S, 18S, and 28S, with about 120, 160, 1,900 and 4,700 nucleotides, respectively. Note: (S is the sedimentation coefficient, which is proportional to the particle size and diameter when the sedimentation rate of a particle is measured by ultracentrifugation. 16S contains 1,540 nucleotides, while 23S contains 2,900 nucleotides.)

Transfer RNA (tRNA) helps translate genetic information from DNA into proteins. Due to the lack of specific affinity between the raw material for protein synthesis (20 types of amino acids) and the bases of mRNA, they must be transported to the ribosome by tRNA. According to the genetic code of mRNA, tRNA can sequentially and accurately mix the paired amino acids into the peptide chain being synthesized. Then, the peptide chain can be extended. All tRNAs have the same three bases (CCA) at the 3′ end, which is the target site for tRNA-loaded amino acid residues. Amino acids attach to tRNA via the carboxyl groups of their molecules and ester bonds between 2′-OH or 3′-OH of the tRNA terminal adenosine. Each amino acid can bind to 1-4 types of tRNAs, and there are more than 40 known species of tRNAs.

Long non-coding RNA (lncRNA) is a type of non-coding RNA that is longer than 200nt and cannot translate proteins. Sources of lncRNAs include introns, antisense, and intergenic regions. lncRNAs are involved in a variety of regulatory processes in organisms and are known to perform cis- and trans-regulation. Recent studies have shown that lncRNAs in the nucleolus (sno-lncRNA) can also regulate polymerase transcription, expanding the mechanism of lncRNA action.

RNA has been widely used in gene function analysis and novel therapeutic research/development, along with various other biological research applications. As the interest in RNA research continues to gain popularity, the needs for RNA synthesis are increasingly, rapidly.

Synbio Technologies has decades of experience in RNA research and development. Our scientists use both chemical synthesis approaches and in vitro transcription synthesis strategies to meet the unique requirements of every client. Our services include RNA oligo synthesis (with various modifications and delivery specifications available), functional siRNA/miRNA synthesis, in vitro transcription RNA synthesis, and more! Our synthesized RNA sequences go through a rigorous, standardized manufacturing process and undergo strict QC reviews. We promise to provide the most economical price to meet the scientists’ diversified needs without sacrificing on quality.