Both PCR and qPCR (Quantitative Real-time PCR) are commonly used molecular biology experimental techniques. Ordinary PCR can perform qualitative or semi-quantitative analysis through agarose gel electrophoresis of the PCR products. While qPCR, through real-time detection of fluorescence signal changes in each cycle of PCR amplification reaction, can perform quantitative analysis of the starting template by using the relationship between Ct value and standard curve. It has characteristics of high sensitivity and specificity, and is widely used in diagnosis and detection. 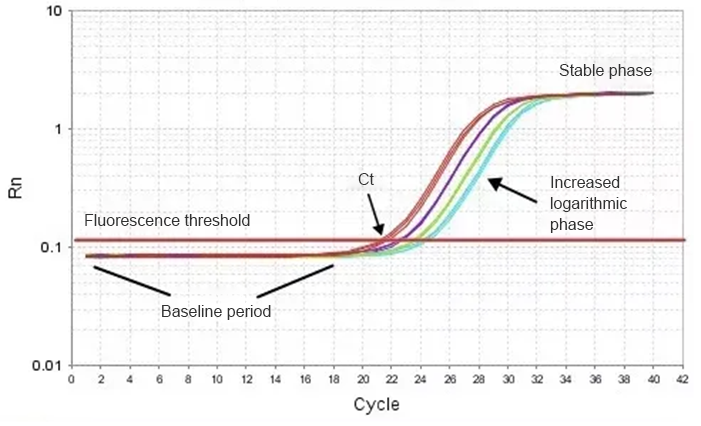 
· Dye method
The characteristics of the dye method are ease of use and low cost. It generally uses DNA dye SYBR Green I. In the qPCR experiment, the dye can bind to the double strands. In the free state, SYBR Green I almost has no fluorescence signal. However, after binding to DNA, it emits a fluorescence signal under the illumination of the excitation light source. Its signal strength represents the number of DNA molecules in the duplex. Therefore, the more PCR products, the more SYBR Green I binding, the stronger the fluorescence signal. In addition, the dye method also needs to do a melting curve to analyze the Tm value of the PCR product. 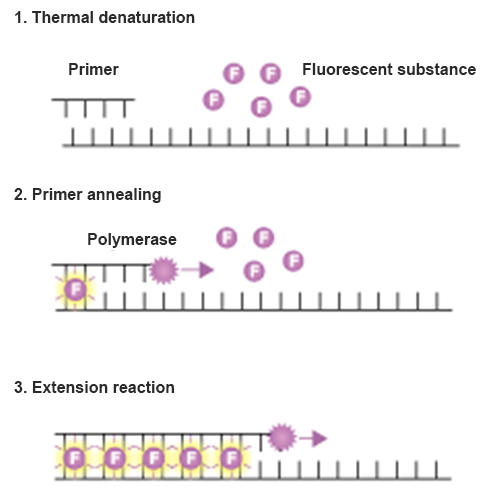 Figure 2. Dye method process
· Probe method
The TaqMan probe method is often used in qPCR experiments. A TaqMan probe is a linear oligonucleotide with a fluorophore group at the 5′ end and a quenched group at the 3′ end. When the qPCR probe is complete, the fluorescence is absorbed by the quenched group, and no fluorescence is emitted. During the process of PCR amplification, the 5′-3′ exonuclease activity of the Taq enzyme will cut the fluorophore group at the 5′ end of the qPCR probe so that the fluorophore signal can be detected after the separation of the fluorophore and quenched groups. The probe method has more specificity than the dye method, it can also be used for multi-system reactions, and it can predict and optimize reaction conditions in advance.

1) Large Ct value (e.g., Ct value > 30)
· If the amount of template is low or the gene expression abundance is low, it is recommended to increase the amount of template and observe whether the Ct value can be reduced by a corresponding fold.
· Inappropriate qPCR reaction conditions or improper primer design leads to low amplification efficiency. It is recommended to confirm amplification efficiency through a standard curve.
· The amplified product is too long. It is recommended to use the three-step procedure to amplify or optimize the primers. The length of the amplified product should not exceed 300bp.
· There may be inhibitors in the system that affect enzyme activity. So, it is suggested to dilute the template gradient or prepare the template with higher purity.

3) The amplifying curve decreased during the plateau
It may be that the baseline range is not set properly, which is usually caused by a high number of templates. It is recommended to reduce the baseline endpoint value (Ct value -4 is generally recommended).

6) The melting curve is not a single peak
· Nonspecific amplification. It is suggested to design new primers, and the annealing temperature of primers can be optimized by gradient PCR.
· Primer dimers, and the primers are non-specific primers. It is recommended to optimize the amplification conditions, set the gradient Tm, and explore the optimal Tm value. Or, appropriately reduce the primer concentration.
· Genomic contamination in templates. Re-prepare the cDNA template.

4. How many repetitions are set?
In general, repeat amplification 3 times for each gene in each specimen, and obtain data (Ct value) for the average value before subsequent calculation and analysis.