shRNA (short hairpin RNA) is an RNA sequence with a tight hairpin loop, including two short, inverted repeats and a loop region connecting them. As one of the common gene suppression tools in RNA interference technology, shRNA can be introduced into cells by a vector, formed into siRNA via enzymatic cleavage in cells, and then formed into silencing complexes, which can specifically target and degrade mRNA to achieve gene silencing. shRNA is widely used in the fields of drug target screening, disease diagnosis, and disease treatment.

shRNAs have a number of potential benefits over other gene-silencing technologies. First, shRNAs are easier to design and produce than siRNAs. Second, shRNAs are more stable in cells and tissues than siRNAs, which may result in better knockdown of gene expression. Third, shRNAs can be delivered to specific tissues or organs using viral vectors, which may improve the specificity of gene knockdown. Finally, shRNAs are less likely to cause off-target effects than siRNAs. Taken together, these benefits suggest that shRNAs may be a more promising tool for silencing genes than siRNAs.

shRNAs are introduced into the nucleus of target cells using vectors and are usually transcribed catalytically by RNA polymerase III and processed by the Drosha/DGCR8 complex to form mature shRNAs. The shRNA is then transported to the cytoplasm by the Exportin-5 protein, where they bind to the Dicer enzyme and TRBP/PACT to remove the loop sequence, producing a 20-25nt double-stranded siRNA with two free bases at the 3′ ends. This active siRNA then binds to RISC (RNA-induced silencing complexes). After removal of one of the RNA strands, the siRNA binds to the target mRNA in a sequence-specific manner via complementary base pairing, thereby cleaving the phosphate backbone near the double-stranded center of the target RNA using the nuclease H-like activity of Ago-2. 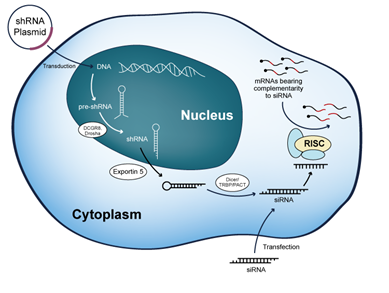 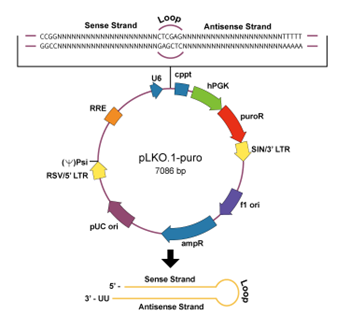 Synbio Technologies offers shRNA vector construction services that enable researchers to create custom vectors. Our vector construction technology assures at least one shRNA can effectively inhibit the expression of the target gene. We use lentiviral vectors that can infect cell lines such as primary cells, stem cells, suspension cells, and cells in a non-dividing state, which are difficult to transfect with traditional transfection reagents. Our experienced team of scientists can help you design a vector that meets your specific needs, and they will also provide expert guidance on performing the RNAi experiment. Synbio Technologies’ shRNA vector construction services are reliable and affordable, and they are backed by a quality guarantee.